Chris will be heading to Japan on the 28th March to take in the 36th All Japan Young Koi Show and buying in Niigata after the show until 8th April. If you are interested in high quality tosai, whether to bring home or leave in Japan for the summer, get in touch by email, social media, or Whatsapp on 07581 319290 to discuss your needs and wants. Please be aware that while Chris is in Japan, Graham will be having an operation on 2nd April which may cause some disruption and the shop will be closed on some days - please call before travelling. Please allow an extra day for online orders. 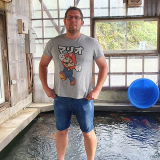 Chris has been keeping koi for over 25 years, and dealing in koi for 15 years. Travelling to Japan to select new stocks is the favourite aspect of the business, closely followed by being on the tools pond building.

It only feels like I've been home two minutes and already I am making the final preparations for our first Japan trip of 2020. On January 30th, we make our way to Tokyo for the 51st All Japan Koi Show and 1st buying trip of 2020. If you would like to join us on this trip of a lifetime, read more and get in touch.

As usual at a Niigata koi show, the weather has been awful. As I approached the show, the weather was changing, at I passed through Echigo Yuzawa, some 70km south of Niigata it as sunny, and dry. At Koide, the sun had gone and now clouds. By Ojiya it was clear the chance of rain was high. I pulled in the car park of the koi show with the windscreen wipers on!

This trip was very last minute, but I couldn’t miss the chance to see the 50th All Japan Nishikigoi Show, which promised to be one of the biggest ever. Normally housed in one hall of the Tokyo Ryutsu Centre (think Earls Court/NEC type venue), this year the event was staged in 3 halls. The usual hall was FILLED with vats, by moving the trade stalls in another hall, and the breeders/dealers vats to the hall below the trade stalls. This year, just short of 2000 koi were entered, from the smallest size class of 12cm and under, through to the 85cm+ sizes, a good handful, including the 101cm Grand Champion were exhibited over the 1 metre mark. New this year was a side view judging event, with small fish less than approx 20cm (not sure on the official size limit) were judged side on, in aquariums.

Sign up to our newsletter for latest koi, products, and special offers!